THE MOVE TO COSTELLO

Many of those interested in road running were particularly keen on the marathon and other long-distance events and were behind moves to start their own club marathon in 1952.

This became an open event in 1956 and although the fields were not large, attracted runners from across the north of England. Many Hull Harriers took part in the East Hull '20' after it became an open event in the 1950s whilst, as we shall see below, some teams travelled far afield from this decade and competed regularly in events such as the South London Harriers '30' and the 56 mile London to Brighton Road Race. 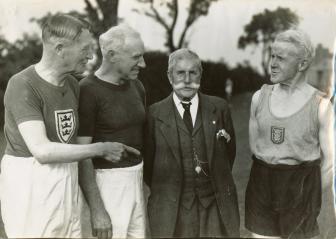 As road running activities blossomed, so too did track and field. In the early 1950s Hull lacked a suitable track and in the latter half of 1952 the club was supporting a local Athletic Development Committee that was trying to persuade those interested in athletics to write to councillors and the Lord mayor to provide a stadium as a permanent memorial to the forthcoming Coronation. The ground on which the Hull Harriers’ pavilion stood was not large enough for a track but attempts were made over the next few years to improve the surrounding land in order to promote field events such as the long jump. The opening of the running track at Hull University, however, highlighted the shortcomings at the pavilion and, as the Secretary noted in his 1954/5 report that although the track and field section had trained hard they had been largely held together by the "keeness and guidance of Club Captain, Ray Peirson". Unless better facilities could be offered for track and field, especially sprinting, it was clear Hull Harriers would have great difficulty holding its own against those rival clubs such as Hull Spartans who used the University track.

The Anlaby Park Road Pavilion was still being extended and improved as late as 1955 but its size and limited changing facilities made it difficult to form a section for women. The formation of a ladies section had been discussed by the committee back in 1934 but had come to nothing although a few women, including Dot Marshall a hundred yards sprint champion and Mrs Tanfield, did train with the club in the inter-war years. A Hull Ladies Athletic Club seems to have been a focus for developing Athletics for women in the early 1950s and, after its apparent demise, the idea of forming a Ladies Section of Hull Harriers was again considered in 1952. However, as a number former members of Hull Ladies were reported to joined Maybury Road Youth Club it was decided to defer taking a decision on forming a Ladies Section until any it could be ascertained if there was a sizeable demand.

In the summer of 1955 the club became aware of a couple of developments which brought the issue of facilities to a head. Firstly, Hull Corporation had decided to construct a running track on the nearby Costello Playing Fields and secondly it became public knowledge that the land on which the existing pavilion stood was scheduled as a development area for a housing estate. Even though the club owned its land it was likely to only a matter of time before they were forced to sell.

Over the next few months there were a series of discussions. On one side with the Parks Department of the Corporation who were anxious for the club to re-locate to Costello and on the other with a local builder, Stan Spruit, who was keen to buy the land. Len Bird and Arthur Nendick played a key role in these negotiations and the final proposals to sell the land to Spruit for £250 and move the pavilion on to Costello were put to an Extraordinary General Meeting held at the Church Institute on the 11 th May 1956. The proposals were accepted and over the next few months put into action. Members swung into action and when the pavilion was dismantled Stan Pleasants provided a lorry to move the sections to Costello where Terry Stinson took charge of re-construction. Many club-members played a part and special thanks were later accorded to Keith Blades's horse which despite having only three shoes for its four feet still managed to pull all the remaining timber from the old site.

The £3000 cost of the new track had been forwarded to the City by the National Playing Fields Association from funds raised from the Butlin's Camps and after moving their pavilion onto the site Hull Harriers spent more than £80 to re-build and extend the pavilion so that it contained a tea room, small office and a committee room that could double as additional changing facilities. With better facilities the subsequent Annual General meeting held in September 1955 finally agreed to form a Ladies Section the following spring. In recognition of the higher profile now being accorded to track and field the post of track captain was created and the first incumbent was Dennis Briggs.

When the Costello Track was first opened it was simply a basic running track with a quarter-mile circuit. At first there were difficulties with drainage and it was sometimes almost unusable after heavy rain and some meetings had to be abandoned when the track surface became, in places, a waterlogged puddle of wet sand. Shower baths were available in some old army ablutions which stood near the club pavilion. These were sometimes a source of embarrassment, especially when other clubs were visiting as the water could sometimes run icy cold and fizzle out to a mere trickle. At first there were no adjacent toilet facilities so the warm up for a track race involved a trip across the park to use the toilets near the bowling greens by Pickering Road. 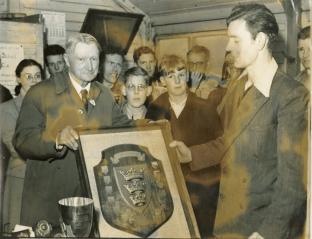 Though the first season's activities at Costello were had been hampered by re-building and unusually wet weather exposed some of the track’s initial shortcomings, the 1956/7 season saw the club's greatest period of expansion to date. Membership passed the 150 mark and the nucleus of a Ladies Section was finally formed. The wave of enthusiasm for track and field following the opening of the season at Easter stretched the club. Fortunately, Ray Peirson and Dennis Briggs had qualified as AAA coaches and their services, together with those of Terry Stinson and Cyril Taylor, were in constant demand. The move was adjudged by most as a remarkable success.

The first two women to officially join the club in the 1950s were Irene Wilson and Ann Wright and they were respectively appointed Captain and Vice-Captain when the Ladies Section was finally formed in the first half of 1959. By the end of that summer the club had sixteen women members - adults and teenagers who trained regularly out of a total membership of around one hundred and fifty and had collected six medals from competition. The youngest member of the section was twelve year old Susan Brocklehurst who took second place in the under fifteens 100 yards at Brodsworth returning 10.6 off 14 yards. The section trained two or three times a week either on the track or around the Park at Costello and the club financed the Section's first away match that summer. The 1962 AGM voted the Sportsman Cup to L. Bloom, the first time it was won by a woman but by the end of the following season it was proving difficult to fill any of the vacant offices in the Ladies Section. Membership again fell away and for a time the club suspended its affiliation to the women's athletic organisations.

There were a number of other runners who made their mark on the track before and after the Butlin Track was opened at Costello. Some, such as Trevor Bailey, did well on the track and the country. Trevor was the English Schools Mile Champion in 1952 with a time of 4.30 seconds and went on to become the Northern Counties Junior Champion. Others included Tony West, Terry Seanor, Ian Walters, George Davis and Reg Darley.