In early 1931 the Hull Harriers team, captained by Alec Johnson, won the Hull and District and Beverley and District in successive weekends. 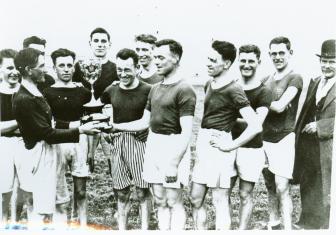 The final race of the series, the Beverley Championships, was over six miles for the Naylor Cup and on the following Saturday a huge crowd gathered on Beverley Westwood.

Five clubs fielded teams for the event which, after starting on the race course, consisted of a series of on one and a half mile laps before crossing the road for a three-quarters of a mile stretch across the rough pasture to the Black Mill and back. Alec Johnson established a lead from the start and by the end of the first lap he was 100 yards in front of his brother George who occupied second place. They were followed by Fred Midford, Guy Sanders and Frank Fenwick of Grimsby whilst G.Roberts, in sixth place, led the Beverley Harriers contingent. After crossing the road onto the pastures beyond, the sun shone down on the ribbon of club colours as the runners wound their way up to the Mill which they rounded before being lost to view in the hollow on the return leg. They soon reappeared after another stiff climb back to the Racecourse for another two laps. By this time Alec Johnson was two hundred yards in front still followed by his brother George. Roberts of Beverley had moved through into third position followed by Harold Owen of Hull Harriers. Into the final lap and Owen was caught by a number of runners but, led by Alec Johnson, who sprinted home in 32.22 an easy winner, Hull Harriers packed well enough to take the Naylor Cup, their third Championship in successive weeks. George Johnson took second place. This was the club's best local performance in the inter-war years by perhaps their finest team of the period.