The club was guided through many of these years by Will Hodgkinson who was Hon Secretary from 1899 to 1929. In 1924 the club were obliged to move from their base on the land adjacent to Blenkin's Farm to the White City grounds. 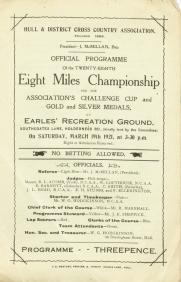 The old pavilion was sold and a new one was purchased. The move seems to have taken place during the summer and several members of the Old Members Committee were present when the club opened the new cross-country season from its new pavilion with the First Run on the 4 th October 1924. The stay on the new site, however, was quite brief. In April 1926 the Secretary reported to the committee that the White City grounds had been sold and an Emergency Committee was formed to deal with the issue. Early in the following year the club was given notice to move after the end of the season and the search for a new based intensified. By early March 1927 an agreement was made to purchase land off Anlaby Park Road being offered for sale by the Hull and District Allotments Association after the Club President, Arthur Burwell, agreed to loan the club the necessary money. In order to buy allotment land the club had to purchase shares in the Allotment Association and afterwards 325.5 square yards were purchased at the cost of 1/- per square yard. A team effort, supervised by the Club Captain, Jimmy Magee was required to carry out the work of dismantling, carting and re-erecting the pavilion over the summer. 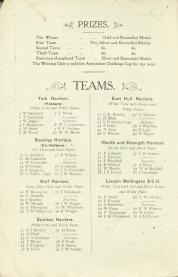 Initially, conditions were quite primitive at the Anlaby Park Pavilion. Tommy R. Jackson, a stalwart of the club, who joined the same year, later dug a well but the water was not always that clear and the club at first relied on acetylene lights. Arthur Nendick, who joined the club in 1936 said that in those days the pavilion was a large wooden hut with an annexe containing three old baths filled by buckets of hot water from a copper boiler. Those who were first back from a club run got hot clean water but with three standing in each bath after a winter session over the country you can imagine the quality by the time sixty or more runners had been through the annexe. By 1938, conditions had improved and the club house boasted electric lighting as well as hot and cold water baths. The standard of running equipment was also quite poor with many members running in cheap plimsolls. Arthur Nendick said he never saw a track-suit until after the Second World War.

Although a few runners tackled track and field events at local Summer sports meetings during the inter-war period, the club was then essentially orientated towards cross-country. The season began as it had done since the 1880s on the first Saturday in October and ran through to the end of March. Although there were mid-week training sessions, the Saturday event was all-important and medals were awarded for 100% attendance. In the twenties and thirties there were a few inter-club runs with East Hull Harriers and Beverley Harriers but the two big away runs were the Grimsby and District Cross-Country Championships in January and an annual coach outing in February to the Yorkshire Cross-Country Championships. 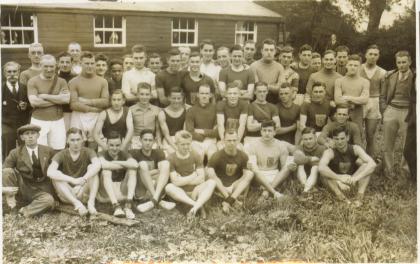 Hull Harriers at the Pavilion

The mid-1920s were a time when Tommy H. Jackson was the club's leading runner. He seems to have joined the club around 1923/4 and on the 24 th October 1924, with a handicap of thirty seconds was both first home and fastest runner in a net time of 14.45. He was also fastest man in the Christmas Handicap and took the club Championship with the fastest time in the Eight Mile Competition held on the 21 st February 1925. He dominated club competitions over the next couple of years, winning the club Championship in both 1926 and 1927. Tommy H. Jackson was a fish merchant by trade and continued to turn out occasionally in club events into the 1930s but remained a major Patron and supporter of the club for many years afterwards. His namesake, Tommy R. Jackson joined around the same time and came through more slowly but made an important contribution to some of the club's wider successes in the late twenties and early thirties. He remained an active member of the club through to the 1960s and played an important part in helping to organise the "centenary" celebrations in 1989.