Hearing of the Hull runners’ increasing interest in road racing, the Bridlington Coronation Festivities Committee approached Hull Harriers to see if they would organise a twenty-mile road race which would finish in Bridlington and coincide with the planned festivities there. The club were delighted to have an extra race sponsored locally and gladly agreed to organise it.

Harry Benson arranged changing accommodation in Driffield and a route was planned to include a small lap around Driffield to make up the distance required and the route was then along the Hornsea Road to Beeford where it joined the main road to Bridlington. Arthur Nendick, Club Secretary, negotiated with the Bridlington Committee and all went well until he contacted the local police. He was told, quite bluntly, that they wouldn't allow the race to finish on the Promenade and cause chaos amongst the "madding throng". They agreed that the route in Bridlington could proceed to the Queensgate Football Ground where a sports meeting had been arranged and that cardboard arrows would be fixed to lamp posts along the route to point the route to Bridlington. Two leading international marathon runners, Eric Smith and Alan Lawton, from the Leeds Harehills Club were invited to compete to add extra "class" to the field. Large crowds were expected at the finish and all seemed ready as the great day approached. Even the best of glorious June weather was expected for the celebrations. 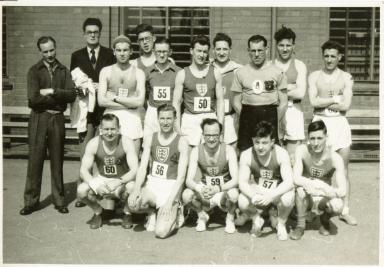 Unfortunately, the unpredictable English climate had other ideas. The race duly started on time but as the runners completed the first two miles, the heavens opened and those competing ran through torrential rain that turned into heavy hailstones as the field neared Barmston - quite painful for those in light racing gear. Entering Bridlington, the streets were almost completely empty. The "madding throng" were all indoors: countless numbers across the country got their first real glimpse of the new media in June 1953 watching the Coronation ceremonies on television. The cardboard arrows had not fared well in the rain and were all hanging down but even so the runners finally arrived at the football ground looking like drowned rats. The two internationals came first and second, followed by Arthur Nendick, the first Hull Harrier home.

Instead of large crowds, they were met by a small group of embarrassed officials. The weather had made everything a complete washout, the sports had been cancelled and everyone had gone home. As all the prizes were left they decided to give one to everyone completing the race. Eventually, after a bath and some light refreshments, the prize distribution began. The winner received a beautiful Rose Bowl, the second quite a nice trophy and Arthur Nendick stepped up for his prize. Fifty years on he still has a good chuckle at his souvenir of the historic day and what he had gone through organising and participating in the race. His prize for third place in this prestigious race? A two inch cup with the legendary inscription Coronation Day 1953 Bridlington, Egg and Spoon Race - First . The best laid plans of mice and men?