A team mate of the Johnsons who joined the club in the 1930s was Frank Staniforth. He really established the club on the road-running scene. Frank was Club Champion in the late 1930s but during the Second World War experienced great hardship as a prisoner of war, along with two other club members, Stan Martin and W. Smelt. 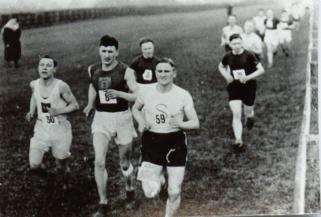 Whilst held in concentration camps Frank organised training for other POWs with circuits of the wire - on the inside of course. During the last months of the war Frank and his fellow prisoners were force-marched across Europe on starvation rations as the Germans retreated before the Allies. Afterwards, he built himself up, finishing second fastest in the five mile Christmas handicap held on 22 ndDecember 1945 with a time of 32.33. After regaining full fitness he won the Club Championships once more during the 1946/7 season. Frank was noted for running from the front and on this occasion he set a scorching pace that only Ted Coggin could stand.

Frank Staniforth in the centre in action on Beverley Race Course

He made every post a winning post and came home first out of the field of fourteen, twenty-six seconds ahead of Ted. Frank and decided to take up Marathon running and was influential in creating an interest in road running amongst club members. Whilst training for a fast marathon and the suffered the ultimate irony of being knocked down and killed by a cycle whilst training on Skidby Hill in 1949. The 1939 Club Champion, Bob Coupland, father of Jeannie Coupland, also made a comeback afterwards, despite being blinded during the war and later turned out in the "centenary" relay at Costello in 1989.