Hull athletes did not limit themselves to local events for in May 1887 a contingent of them met with "gratifying success" in the sports of Cureghen United A.C. in Brussels. J.S. Leeming of Hull A.C. took the 120 yards handicap whilst his club-mate, A. Close, claimed first position in the quarter mile bicycle race.

As far as running was concerned, Hull Athletic Club was primarily concerned with summer track events. Yet it acted as a catalyst for the development of many other sports in the area. In the last quarter of the nineteenth century people worked long hours and the average working week was at least five and a half days with strict observance of the Sabbath. For an increasing number - of men at least - Saturday afternoons was an opportunity to spectate or participate in sport. In winter Hull Athletic Club ran a successful rugby team but many other sporting clubs began to spring up. Amongst the most prominent of these were cycling and tricycle clubs that proved extremely popular at this time. 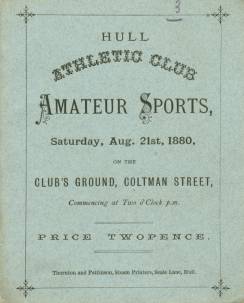