Two Hull Harriers dominated the local running scene at the end of the 1880s. John Baker, was one of the prime movers in the organisation of both the Monstre Meet and the Hull and District Cross-Country Association. 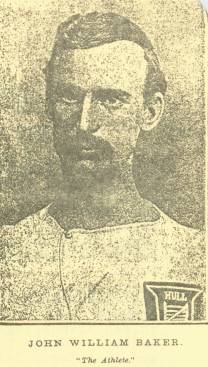 He was appointed vice-captain of the club in 1887, made captain the following year and finished fourteenth out of seventy seven runners in the first Yorkshire Cross-Country Championships. Baker, like many early Hull Harriers, probably started on a bike but had been induced to "don the pumps" at the back end of the summer of 1885 and gave a good account of himself, finishing third to Ben Bolton and Charley Cowen. The following season he took to the track in great earnest and soon won his first handicap mile, adding three further prizes before the end of the season. These included the three-mile harriers' handicap over hurdles - the first time such an event had been staged in Hull - and the Hull Athletic Club Mile Championship in 4.44. The following year, at the Hull F.C. evening sports, he worked his way through a field of 38 runners from scratch on a wretchedly wet and sodden track to win in 4.41. In 1889 he was only 23 but had already won more than £80 worth of prizes with thirteen first places, eleven seconds and eleven thirds to his credit. During the 1890s Baker was to win the Hull and District Championship on at least two occasions. 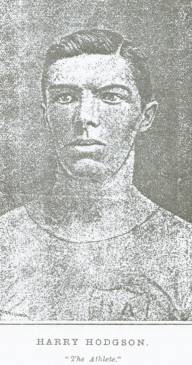 Harry Hodgson was a freeman of Beverley and had joined a new harrier club formed in connection with Beverley Cycling and Athletic Club in 1886. Unlike many other early harrier clubs this one's members seem to have run mainly at night. His first race that year was in the annual sports of the club when he finished fourth in the four mile handicap then took second place to another well-known Beverley runner, Will Carrington, in a two and a half mile handicap after the two had run neck and neck for much of the distance. The following year he moved to Hull and ran with Baker as part of Hull Harriers' team in the Kennedy Cup and won a number of local races during the summer track season. Although injury curtailed his running on the country in the 1888/9 season he came back later in the summer to win track races at Leicester, Lincoln, Manchester and Nottingham. In Manchester he was beaten in the premier mile event by the leading miler, A.B. Snell, but finished in front of many of the country's leading runners with the then superb time of 4.21. Hodgson took over from Baker as club captain in 1889 and, of course, won the first Hull and District Cross-Country Championship later that season.