In the nineteenth century, athletics, like many sports, developed amateur and professional codes. The origins of professional athletics or pedestrianism are obscure. The Harleian MSS mentions an early 16th century foot-race at Chester for a prize of "six glayves of silver".

Falstaff, in Henry IV Part 1 offers to run against Poins for £1000. Samuel Pepys, refers on several occasions to races between footmen in the Restoration Period and by the end of the eighteenth century an increasing number of reports on professional races were appearing in newspapers and journals. In 1813 W. Thoms published his book Pedestrianism which surveyed the outstanding performances to date and covered the career and training methods of the legendary Captain Barclay Allardyce. Captain Barclay (1779-1854) had won, amongst other prizes, some £16,000 by walking 1000 miles in 1000 successive hours before a crowd of 10,000 at Newmarket in 1809. This required him to walk a mile an hour, every hour for forty-two successive days. Public interest in pedestrianism continued to grow and reached a peak in the last quarter of the nineteenth century with epic six-day events held in London and other places. These events were often held indoors and took on the atmosphere of a horse race meeting. Heavy betting and great excitement built up as the competitors ground their way relentlessly around the circuit. Professional athletics then declined in importance but did not, of course, die out; the Powderhall Sprint, for example, became the highlight of the Scottish sport.

Barclay enjoyed a hearty drink but his training methods which involved purging, sweating and the eating of meat found much favour with many nineteenth century runners. Later, as athletics spread into the universities, more straightforward training programmes were adopted, although, as always, some athletes took this trend too far the other way and competed with only minimal training. The association of athletic ability with the manly ideal was still strong in the sport in the nineteenth century and equality of opportunity scarcely considered. Indeed Walker (1837) declared that "owing to the excessive shocks which both (running and leaping) communicate, neither are congenial to women". The achievements of women in the nineteenth century may well have been underplayed and certainly a number of women made a considerable mark in the field of pedestrianism. Exilda La Chapelle, born in France in 1859, and an English woman, Ada Anderson, both set incredible records for endurance in the United States in the late 1870s. Exilda made her was the first to make her name, walking in night races for a couple of years in front of raucous crowds before retiring from the sport to marry and have a child at the age of seventeen. Ada Anderson successfully walked 2700 miles in 2700 consecutive quarter hours. Not long afterwards, Exilda, heartbroken after the death of her infant son, decided to return to competition and between the 25th January and the 22nd February 1879, walked 3000 miles. During this walk her weight dropped from 100 to 92 pounds. She is believed to have competed for the last time at the age of 22 in California and nothing is known of her later life. 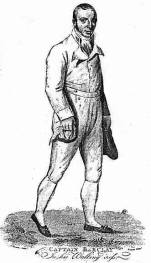 Rural games had always been important, especially the famous Scottish Highland Games. South of the border, the seventeenth century Cotswold Games inspired Annalia Dubrensia, a book of poems. The annual Grasmere Sports are amongst the few such ancient games to survive. During the nineteenth century many English villages made a big feature of their athletic sports and, indeed, some still do today. Such sports are probably more closely related to modern athletics than pedestrianism.

Modern athletic meetings probably had their origins in the organised competitions held at the Royal; Military Academy at Woolwich, London in 1849. In 1850 students at Exeter College, Oxford, disappointed with their poor riding in the College steeplechase, staged a "footgrind" across country and an Exeter Autumn Meeting. This followed Jockey Club lines for top runners were even weighted and a Consolation Stakes for "beaten horses" was included. During the 1850s athletics spread through the Oxford and Cambridge colleges and in 1864 the two university towns met for the first time in what was to become one of the most fashionable meetings in the athletics calendar. Elsewhere, the sport began to take off. Liverpool Athletic Club was formed in January 1862 and London businessmen founded Mincing Lane Athletic Club in 1863. In late 1865 the Amateur Athletic Club was formed and their first Championships were held in the following year. The club may have been amateur but it aimed at being exclusive reflecting the class divisions apparent in Victorian society. Its definition of an amateur soon excluded "tradesmen, labourers, artisans or working mechanics".

Many of these early championships were primarily concerned with track and field but cross-country soon gained in favour. Cross-country has its origins in the early nineteenth century sport of hare and hounds or paper chasing, as made famous in Tom Brown's Schooldays. The first formal competition, the Crick Run, was first held at Rugby School in 1837. The best time recorded for this nine-mile event over roughish country prior to the 1870s was 62.45. Such events became popular not only at Rugby but also at Marlborough and other public schools, followed by Oxford and Cambridge Universities.

The harrier sport as such was probably first launched by members of Thames Rowing Club and London Athletic Club who organised the earliest cross-country hare and hounds outside of a public school across Wimbledon and Putney Commons on the 7th December 1867. Their original idea was to use such events as a means of keeping fit during the winter but the interest attracted led to the formation of Thames Hare and Hounds in 1868. Thames Hare and Hounds are, of course, the oldest such club in the world and met in its early days at the Kings Head, Roehampton Bottom which was equidistant from Barnes and Putney Stations on the London and South Western Railway. By 1871 there were several other clubs in the London area including Hornsey Harriers and the Mars Harriers that "hunted" in the Lea Bridge district. Membership of many of these early packs was confined to gentlemen. Indeed an 1874 copy of Thames Hare and Hounds Rules and Bye-Laws specifically prohibited members from competing at any tradesmen’s meeting under pain of expulsion and stated that "no one who is under eighteen years of age, or who is not a gentleman by position and education, shall be eligible for election". However, the Sporting Gazette of January 1871 noted with approval that the sport was being taken up by others and fortnightly tradesmen’s runs were regularly taking place from Hampstead and elsewhere. Wimbledon Common, Richmond Park, the Sheens, Kew, Mortlake, Petersham, amongst other places, were considered to afford capital country for runs though it was reported that "farmers, as elsewhere, are decidedly adverse to the pattern being laid over their grounds".

In those early days a dozen "hounds" formed the average sized field, although as many as twenty-five might turn up. The hares, who laid the trail with strips of paper carried in long bags slung over their shoulders, were given ten minutes start. The trail of paper was known as the scent and the hares were expected to follow the scent unless/until they sighted the hares when they could chase them directly. According to the Sporting Gazette, the average pace, including checks, was generally reckoned at about seven and a half miles per hour and about ten miles was the average distance then covered. If the hares ploughed through the thickest mud or swam a river no hound was reckoned as having finished unless they followed their trail.

The first English Cross-Country Championships were staged in Epping Forest in 1876. However, all thirty-two competitors went off course and the race had to be declared void. The following year’s event, held over eleven and a quarter miles at Roehamption, is therefore considered the inaugural race. By 1881 the Championships attracted more than 100 starters and from 1883 were organised by the English Cross-Country Union, originally known as the National Cross-Country Union. The number of participants grew decade after decade and by 1979 no less than 1672 runners took part in the Senior Championship event. The first international, between France and England, was held in 1898 and the international championships began in 1903.

Meanwhile track and field athletics continued to develop. There was an upsurge of interest amongst all classes in the north and midlands that challenged the ill-enforced class rules of the AAC and other athletic bodies. In 1879 representatives of twelve northern clubs met to form the Northern Counties Amateur Athletic Association and in the next year the Midland Counties Amateur Athletic association was formed. The Amateur Athletic Association followed a few months later. The moving forces behind the AAA were three young Oxford men, Clement N. Jackson, 33, Bernhard R. Wise, 21, and Montague Shearman 22. The first AAA Championships were held on the 3rd July 1880 at Lille Bridge and the modern athletics movement was underway.

The latter third of the nineteenth century witnessed the development of many organised sports, competitions and the emergence of many sporting clubs. In part, this was an outcome of a marginal increase in leisure time and perhaps affluence for some working class and professional men. Many people worked a five and a half-day week and an increasing number of sports made use of Saturday afternoons. Railways also played an important part in the development of local and national competition. The national rail network was largely completed by the 1860s and in later decades was increasingly used by various sports and their associated clubs for competitions over a wider geographical area.