As road running grew in importance so runners began to travel further on a more regular basis during the later 1950s and early 1960s. Initially, few members had cars or motorbikes but as the working week shortened and more came to own vehicles it was that bit easier to travel to out of town races.

At first, the marathon and other long distance races such as the London to Brighton and SLH 30 attracted club members but shorter distances, especially 10 mile road races, proved popular. Local road races were also promoted which drew competitors from some distance whilst a number of the club’s runners became known on far and wide for their performances on road and track as well as country. 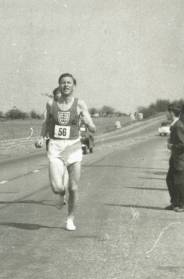 Frank Lucop joined the club in July 1952. He turned up at the Anlaby Park Road club house one Thursday evening intent on becoming a miler. The following Saturday, Arthur Nendick, Dave MacDonald, Colin Waudby and Reg Taylor took him on his first training run, a seven-mile outing round Jenny Brough Lane. It was late in the season to think about mile races and in a short while Frank began making his mark on first the road running and then cross-country scenes.

As his fitness and experience increased, he established himself as one of the club's best runners. He was club marathon Champion on no less than ten occasions - running a pb of 2.31.48 in 1957 and was noted for taking no prisoners in the last few miles at that distance. Off the road he won the club eight mile cross-country championship and finished runner up in the Hull and District Cross-Country Championships on three occasions. In one month in 1957 he ran with Colin Waudby, Dave MacDonald and Mike Kirkwood in the Hull Harriers squad that took the team prizes in both the London to Brighton and South London Harriers '30' road races. One of his most notable individual achievements was to win the Classic South London Harriers '30' in 3.11.00 on a blistering hot day in 1964. He was third in the same race the following year with a pb of 3.02.26 and was part of the squad which took the team prize in this race again in 1967. His team mates on that occasion were Bert Cooper, who took second overall place, and Jim Kirwood. 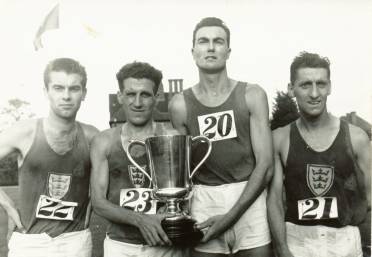 These races were epics in more than one sense for the journey south in those days was sometimes an arduous affair. On one occasion in 1967 Frank Lucop and Bert Cooper, setting off after work on a Friday night, took the ferry to New Holland then travelled down on Frank's Ariel Leader 250cc motor bike. After an overnight stop and then the afternoon race, they made their way back, complete with prizes. On that occasion, Bert, riding pillion, had to carry a standard lamp with him all the way back to Hull.

Through much of the 1950s Dennis Briggs blazed a trail on the track. He made his mark in the Yorkshire Championships in 1952 with fourth place in the mile in 4minutes 33 seconds and as a result was chosen to run for Yorkshire. His notable performance being first with a time of 9 minutes 25 seconds on a heavy grass track in the two mile team race at Mexborough Sports. In that race Hull Harriers won the team prize, beating the favourites, otherham Harriers whose team included England International, Eddie Kirkup. The other members of the Hull team were Fred Fussle and Dave Plewes.