THE END OF THE CLUB PAVILION

When the club sold its land and moved on to the Costello Stadium site with the encouragement of Hull Corporation, it believed it was moving on as the managing club. 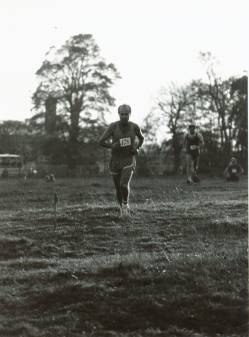 Yet though the Corporation had been anxious to see the club installed at the track and were happy to see them erect their pavilion, the club's actual status there never seems to have been resolved to the satisfaction of club members. The ambiguity thus created seems to have caused long term problems between the two sides. However, whilst the club no longer owned its own land, at least it retained control of its own club-house.

Fred Fussle in action on the country

The Corporation were keen to improve facilities at the track and during the autumn of 1961 club members were informed that the Corporation intended to erect a brand new pavilion by the Costello track and offered a tenancy to Hull Harriers. It was clear that this facility would be open to other clubs and individuals. The club had always had exclusive use of its own facilities since the first pavilion had been built near Blenkin's Farm in 1908. Before making such a move the club were anxious to secure, amongst other things, exclusive use of the facility at key training times. Moreover, the committee were concerned about the level of rent initially proposed. The subsequent negotiations over conditions and usage appear to have been somewhat strained and by early January 1962 the club had received a formal letter from the Town Clerk's Department giving them notice to remove their pavilion from its site at Costello by the 1 st July 1962. Many members felt aggrieved by such action, especially as they felt they had been encouraged by the Corporation to move on to Costello only a few years before. The two sides continued to argue over the rental rates and a move to other venues, including re-erecting the pavilion near Hessle Tennis Club, was considered, but the club eventually agreed to use the new facility and with some reluctance dismantled and sold off its pavilion by the beginning of July 1962. Facilities at St Marks Church Hall were used as a base for some training runs for a while in order to keep down rental costs and memories of the way the whole issue was handled sometimes soured relationships between the two sides over the ensuing decades. Over a six-year period the club had obtained the use of better track and field facilities at the cost of relinquishing the ownership and management of its own club-house and facilities. Henceforward, it was just one of a number of organisations using a publicly owned and managed sports facility.

In terms of the facilities it provided, the new pavilion was an improvement. It had separate changing rooms, shower baths and toilets for both sexes and in the centre was a small general club-room. At the same time, the railings which had surrounded the track were moved well back and the layout altered to conform to metric distances which had by then been adopted throughout the world. Over a number of years the changing rooms were extended and improved. Indeed, during the 1960s, many other cities in the north were jealous of the track facilities at Costello.