Whilst competition within the club was vigorous in the 1920s, members did not do so well in wider competition. 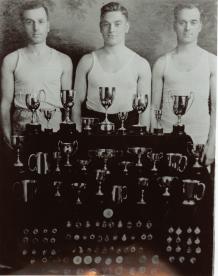 Hull Harriers had last won the Hull and District Cross-Country Championship in 1908 and, in period immediately following the Great War, often played second fiddle to Hull Health and Strength Harriers. This popular club, founded during the first decade of the twentieth century, had its club house at Dairycoates on Hessle Road and in the early 1920s the Johnson Brothers, Alec and Frank, were amongst its best runners. In 1924 Hull Health and Strength Harriers were wound up but by this time Alec Johnson had joined the RAF where he became the mile and three mile champion. After demobilisation around 1928 he joined Hull Harriers and proved virtually unbeatable in local cross-country events. The Johnson brothers were great sportsmen and well-known in local athletic circles. Alec's brother George was another of the club stars and took the Grimsby and District title amongst other honours whilst Ted Johnson was a great swimmer and boxer. Cliff Johnson, another brother, played professional football with York City, Wolverhampton Wanderers, Port Vale and Torquay.