THE LATE VICTORIAN AND EDWARDIAN ERA

Indeed, Hull Athletic Club seems to have declined in standing during the later 1890s. Charles Merrikin remained Club President until he resigned at the end of the 1892/3 season when J.H. Young took over the office. The Spring Bank Hotel remained club’s headquarters for much of the 1890s remained the Spring Bank Hotel and, during the months of the harrier season, committee meetings seem to have been held on almost a weekly basis. The club still retains a tenuous link with the pub in that it is occasionally a meeting place for members when they choose to sample the delights of the Spring Bank hostelries. 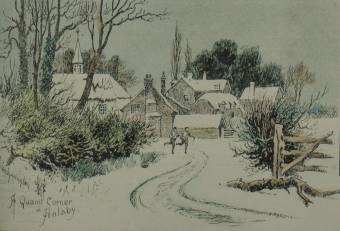 Hull Harriers Running in Anlaby in the later 19th Century

The three main club championships, which became established in the 1890s, were the broadly the three, five and eight mile handicap races, although these distances sometimes changed in the early years. The club also continued to compete in the Hull and District Cross Country Championships and the Monstre Meet. The latter proved especially popular, indeed, the 1893 Meet at the Locomotive Inn on Hessle Road produced a muster which completely dwarfed all previous efforts. All the Hull Clubs, together with Driffield and Grimsby Harriers were represented. All told, one hundred and eleven runners assembled and, as was the practice on such occasions, medals were not only presented to the fastest home in each pack but also to the club mustering the most runners. At the meet T.G. Martin of Hull Harriers secured the fast pack medal whilst A. Durham of Speedwell and A. Croft of Grimsby took the medals for the medium and slow packs respectively. A magnificent silver whistle was presented to Bethell Harriers for the largest muster of 26 runners and the tea after the run was attended by 88 of the athletes whose performance on the festive board "was fully as startling as that across country". A smoking concert "of the most approved order" followed, presided over by J.H. Young who was supported by a strong cohort of "Vice Presidents, friends, warblers and others". 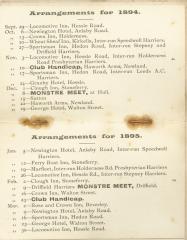 Extracts from the Fixture Card for the 1894/5Season

The Yorkshire Cross-Country Championships were the main event that the club contested further afield and, after a trial, a strong team was assembled for the 1893 race. Prospects looked less rosy, when one of those selected, H. Barrett, fell ill before the race and had to be replaced by H. Dring, the first reserve. After the start Jackie Graham, a relatively new member, going strong at the front, was attacked by a stitch and the club’s efforts seemed likely to come to nought but J.H. Brown led the team in being seventh man home in the race. The plucky efforts of the older members, coupled with the remarkable form of two first season men, enabled the club to squeeze home in third place, seven points ahead of Halifax, enabling them to take team medals for the first time. 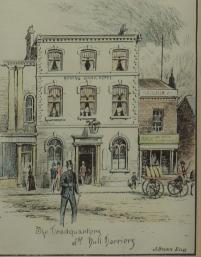 Most Saturdays during the season in the 1890s were spent on paper chases organised from a range of different venues, usually public houses, around the outskirts of the town and occasionally somewhat further afield. Attendance levels waxed and waned: during the 1893/4 season they averaged almost 21 per meeting but during the 1894 season, the severe winter weather saw average attendance fall to less than twelve. The paper trail, was, of course, uncertain, sometimes erratic, and often took them well off the footpaths as the hares did everything they could to avoid being caught by throwing the packs of the scent, although on one occasion in November 1893 they were warned by the committee not to lay the trail along the railway lines again.

Though Hull Harriers had begun to dominate Hull and District winter events from the early 1890s - with captain Harry Hodgson winning the first race - it was not until the following decade that they really made their mark further afield. The 1902/3 and 1903/4 seasons seem to have been especially successful. In January 1903 a crowd of between three and four hundred spectators watched the eight mile championship race, held on a course from Dairycoates to Anlaby and back via Hessle. The Club Championship and gold medal was taken by C.G. Constable (off scratch) and the race also counted as the trial for the Senior Yorkshire Championship, won by the club for the first - and so far only - time in its history. The Championships were held on Ripon Race Course in March 1903. The individual winner was A.E. Barker of Leeds City but J.G. Constable took fifth position and behind him the Hull Harriers team packed well: H. Lee, J. R Bailey and J. Bailey taking sixth, seventh and eighth positions respectively. G. R. Tilllotson was the last counting man home in tenth position and this gave Hull Harriers the Yorkshire Cup and Championships. 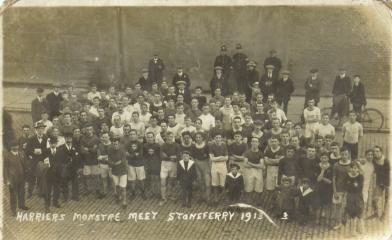 The final team positions were first Hull Harriers (36 points), second Leeds A.C (43 points) and third Rotherham (63 points). That season, the club also won the prestigious Northern Junior Championship - Junior referring to distance rather than age and was over five miles whilst the Senior Championships were usually over eight mile courses. Constable again led the club home in early April to take the Hull and District Cross-Country Championship. In this race, held on the Boulevard in wretched weather, the first four men were all Hull Harriers. They rounded off the season by holding a smoker and presentation at the White Horse Hotel on Carr Lane on the 15 th April 1903 when formal presentations of the Yorkshire Cup, the Northern Shield and the Hull and District Cross-Country Championships Cup were made.