THE SECOND WORLD WAR AND ITS AFTERMATH

After the outbreak of war in September 1939 a large number of club members joined the armed forces. The three, five and eight mile handicaps were all run during the 1939/1940 season but the numbers of competitors were naturally down on the usual turnout.

Seventeen runners finished the three miles handicap in November 1939 but only ten members ran in the eight mile handicap in April 1940. All three races were held again during the 1940/1941 season and the numbers of competitors were slightly higher with fourteen runners completing the Christmas Handicap on 14 th December 1941.. Indeed, the Club's last official race during the war was a combined Eight Mile Club Championship and Christmas Handicap which took place from the Pavilion on 12 th December 1942. The distance actually run was somewhat less than eight miles and the first man was K.Ventry whilst the fastest man, D.Mumby, finished in 36.09. 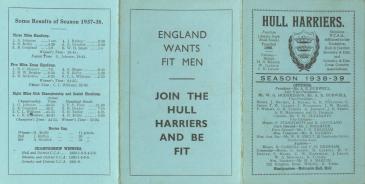 Shadows of War? Hull Harriers fixture card for the 1938/39 season

During Second World War the Anlaby Park Road Club-House was once again destroyed by enemy action. Perhaps no other English athletic club can match this unenviable record. With so many members away on active service the club seemed to be in dire straits but a small group of stalwarts led by Arthur Burwell, President for over forty years, kept it going by meeting for a run every week, the only club of its kind in the district to do so. Tommy Jackson and G. Askew, in spite of being fully engaged in war-time duties, salvaged as much as possible after the bombing. So successful were their efforts that a new if somewhat temporary pavilion was soon constructed from the wreckage which lasted until the end of the war, although it was damaged by hooligans during the winter of 1944/5 when all the windows were smashed and interior contents damaged. During that season, at least, the club managed to send a Senior team to the Yorkshire Championships held on Leeds University's grounds and the first Hull Harrier home was a new member Ken Claybourn. 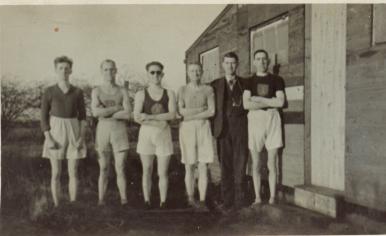 Hull Harriers at the temporary pavilion 30th December 1944. A.E. Burwell, President is third from the right

With the ending of the war in 1945 and the gradual demobilisation of many of the members, Hull Harriers were keen to re-start their usual activities. The autumn 1945 season started with a very good turn out of runners and, although many members were not immediately released from the armed forces, attendance continued at a satisfactory level despite the temporary nature of the accommodation. Twenty-six members turned out when the three mile championship was resumed on the 24 th November 1945, although only eight runners chanced their arm in the first post-war eight mile handicap held on 2 nd February 1946. Despite the post-war austerity a new pavilion was obtained and transported to the site thanks to C. Turpin and then erected by Tommy Jackson, R. Dexter and Terry Stinson, assisted by many of the summer season runners. At first accommodation remained much inferior to the pre-war pavilion. It was lighted with Tilly Lamps and problems with obtaining water meant that bathing and washing facilities were even more restricted. Gradually improvements were made and Calor Gas was installed for lighting and then heating kettles for mugs of tea in the late 1940s. The Local Education Authority assisted the return of summer competition by allowing the Kingston High School playing fields to be used for training.