Walter Barnes probably joined the club about 1904 and may well have initially been a summer track athlete. Although he was given a handicap for the three mile event held in November 1904, he does not seem to have actually raced.

However, he was off scratch in the 1905 three mile handicap and came home tenth with the fastest time of 17.04, following it with the fastest time of 28.25 in the five mile Christmas Handicap. He was soon well established in the cross-country events, taking second place in the eight-mile handicap held in February 1907, repeating the performance a year later. He was also the fastest man in the 1908 Christmas handicap and looked set to do well in the club championship but sustained a serious ankle injury in the race. He returned to the country the following season and became Club Champion, winning the eight-mile handicap in February 1910 and again in 1911. He does not seem to have competed in the 1912 race but won the Championship event again in 1913 and February 1914. His final race for the club was the five miles Christmas handicap, held in December 1914 and he won in a time of 36.45. The Great War had started in August 1914 and this was the last official club race until the return of peace. 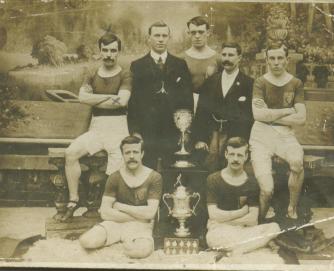 This photograph, taken in 1906 or 1907 probably includes Walter Barnes. The cups are the Hull&District Trophy and the Naylor Trophy for the Beverley and District Cross-Country Championships

Some time afterwards, Walter Barnes joined the East Yorkshire Regiment and was killed, in the Arras Offensive around the 4 th May 1917. He probably died in the attack on Oppy Wood which claimed the lives of 209 men from the East Yorkshire Regiment and he has no known grave, his name being recorded on the Arras Memorial. This commemorates almost 35,000 servicemen from the United Kingdom, South Africa and New Zealand who died in the Arras sector between the spring of 1916 and 7 th August 1918 who have no known graves. Walter Barnes died as Club Champion and after the war the club presented the original Eight Mile Championship to his widow in his memory. In the late 1980s his daughter wished to return the trophy to the club but unfortunately, someone, whom we can only assume was masquerading as a club member, turned up and collected the trophy from her. It has never been seen since. 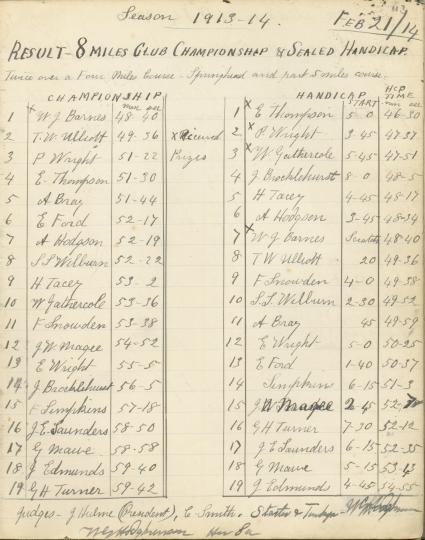 Details of the Club 8 Mile Championship event from February 1914

Although it is not clear from the surviving records how many were killed, the Great War seems to have taken a heavy toll of club members. Of the nineteen runners who turned out in the February 1914 Eight Mile Championship it would appear that at least six, including, of course, Walter Barnes, perished before the Armistice. They included James Brocklehurst, Frank Simpkins, Sydney Wilburn, Percy Wright and George Henry Turner. Several appear to have been posted missing in action and have no known grave.

During the Great War the original pavilion was destroyed in one of the Zeppelin attacks on Hull but was rebuilt afterwards by the club. However, it took some time for the club and its members to recover. Only eight runners turned out in the eight-mile handicap held on the 14 th February 1920, the first race entered in the official record book after the War. G. Thompson was first home in the handicap but the fastest time (49.06) was recorded by T.W. Ulliott.