Ted was another of the club’s outstanding runners and made his mark in the later 1940s and early 1950s. In 1946/7, after finishing second to Frank Staniforth in the Club Championship, he went on to win the Hull and District Cross-Country Championships with a brilliant dsplay of running. Emulating Stani’s tactics he tore away from the start and led all the way home. 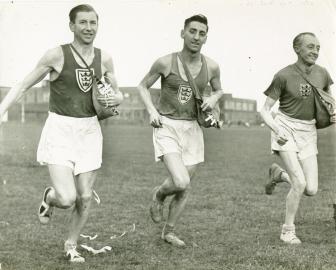 For a number of years Ted dominated the local cross-country scene. He won the Hull and District Championships on no less than five consecutive occasions and the Grimsby and Districts four times. Further afield, he was third in the Yorkshire Championships on two occasions and represented the County in the inter-counties at least twice, helping them to third place in both 1948/9 and 1950/1. His crowning achievement was finishing eighth in the National Cross-Country Championships and then representing England in Brussels in 1951. He was the first international from any Hull running club. During his career Ted also won the Club Championship on five consecutive occasions, finally losing by four seconds to Trevor Bailey after a wonderful battle in the 1951/2 Championships. The two runners stormed away from the rest of the field to finish one and a half minutes in front of Reg Darley in third place.

Ted was Treasurer of the club for many years and during the peak of his running career he did much of his training on Beverley Westwood, completing at least one circuit each morning before work. Although a superb cross-country runner he was quite small and wasn’t very good at getting over obstacles. On one occasion he was dithering over a barbed wire fence so Terry Stimson picked him up and passed him over to the runner already on the other side.